The Secret to Why This Teacher Won the Oscars of Teaching 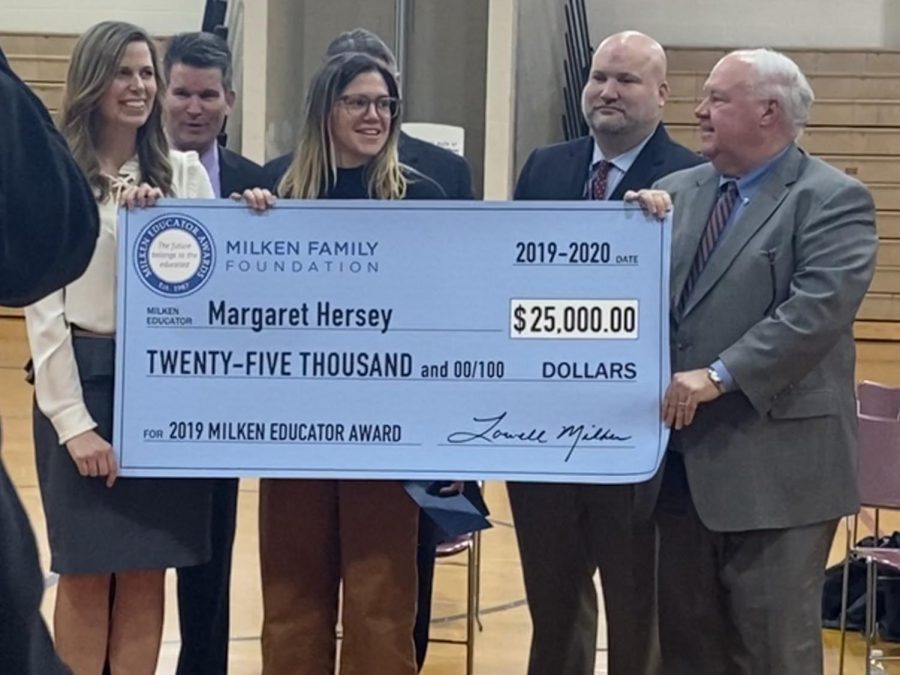 Springfield Honors Academy teacher Margaret “M.E.” Hersey won the Milken Educator Award, which is said to be the “Oscar of teaching”.

On December 4 Superintendent Daniel J.Warwick, Mayor Domenic Sarno, and local news gathered in the High School of Commerce to surprise one teacher with the Milken Educator Award.

Margaret Hersey was awarded the Milken Educator Award by Greg Gallagher, a representative from California.

“She’s a very kind person who does her best to teach her students the same kindness as well as knowledge,” said Catherine Jorzack, a Springfield Honors Academy junior.

The Milken Educator Award awards the top educators around the country with $25,000 for them to spend however they want.

The Milken Family Foundation has been awarding various educators in America for 30 years. A few of these educators were at the ceremony last wednesday to congratulate Hersey on her achievement. After the ceremony Margaret Hersey said she was in disbelief and didn’t know what to do.

“Thank you a million. I feel honored and humbled. I wish that everybody could get this award,” said Hersey after the ceremony.

Principal  Grace Howard-Donlin of the Springfield Honors Academy had put in a recommendation to the state for a teacher for the award and it was elevated from there.

Howard-Donlin said there are specific guidelines for teacher recommendations and certain staff met certain ones. She also said that choosing a teacher was difficult.

“There are countless educators that fully deserve recognition,” said Howard-Donlin after the ceremony.