Why Any BODY is a Bikini BODY 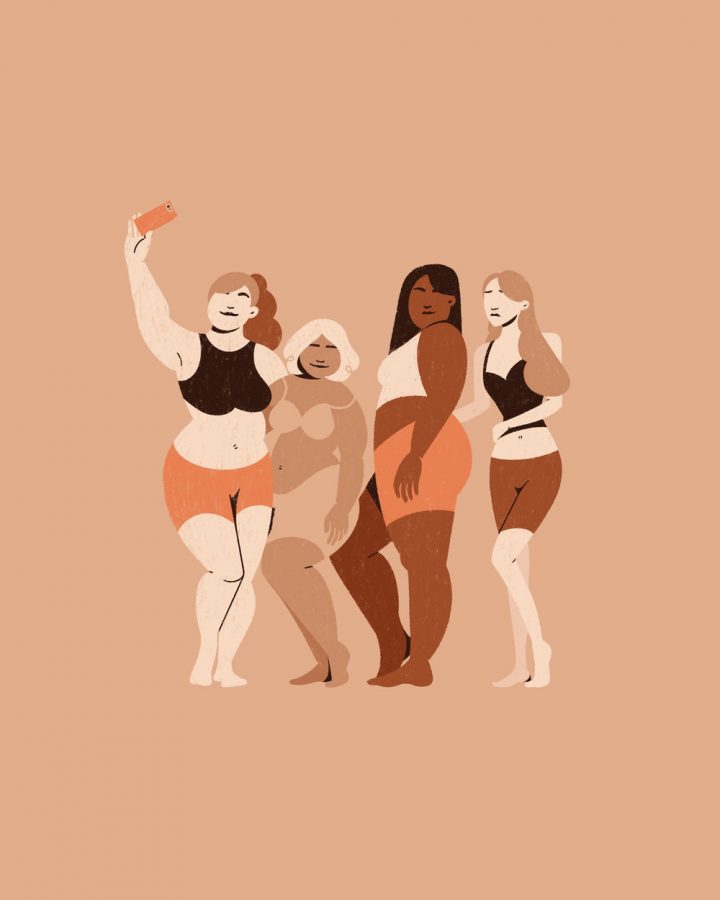 There has always been some type of beauty standard to look up to over the years. And no matter the standard of the time, it has been hard to meet for many people causing issues like insecurities, low self-esteem, and even mental health issues.

The beauty standard today is no different. Being thin, petite, having a small waist, big breasts, nice bottom, and a pretty face–all at the same time–is unrealistic. These standards can be very harmful, especially when forced onto young girls. Everywhere you look you see these standards shoved into your face and it always has you asking, if everyone is like this then am I the one who doesn’t belong? The blame for all this self-doubt is simple: The media, and specifically, beauty advertising.

In beauty advertising, girls who meet these standards are praised far more than girls who don’t. And the more you see the difference, the more you may wonder, Am I the person in the wrong here?

The answer is no, you’re not. If everyone is different how can you be wrong in the way you are? But that’s hard to realize when most of the beauty products being advertised to you are truly only meant for people who meet these toxic beauty standards.

Only four percent of women in the world consider themselves beautiful. The rest don’t feel as if they belong because of how much the toxic beauty standard is pushed into beauty advertisements. According to the National Association of Anorexia, at least 30 million people of all ages and genders suffer from an eating disorder in the U.S. The beauty standard to be skinny was created by advertisements for popular culture and it made bigger people feel like they don’t belong, causing them to starve themselves and unfortunately ruin their mental health. Always comparing your body to those in the media can brain-wash you into thinking that just because your body isn’t like that it means you’re doing something wrong in society.

“The media stops me from having the confidence to post myself on social media apps. If you’re overweight you’re perceived as disgusting and ugly” says my friend Brianna H., from Central High School. “The media brings you down, making you think you don’t look “right.” It makes you feel like you don’t belong.”

An Instagram influencer/model, @thecurvytrini says, “I spent the vast majority of my life feeling like I was living in a world that I literally did not fit into, but I wasn’t alone.” @thecurvytrini uses her page to encourage others to be confident in themselves. “I starved my body so much during high school, I would literally faint during assemblies sometimes.”

There is a solution to this self-doubt that has been in progress for a while now known as the body positivity movement, “Body positivity is guided by the understanding that feeling positive and accepting of appearance can improve mental health, reduce the risk of eating disorders, and allow someone to function at their best” says the article, “The Importance of Body Positivity,” by The Recovery Village. This movement combats negative body image and suggests solutions to help women in a time of unhealthy and unrealistic appearance ideals. There are many ways to project light onto body positivity like putting more people who don’t meet the beauty standards into beauty advertisements. Studies show that the more we’re exposed to body diversity, the more we tolerate, accept, and even prefer different body types. But this cannot happen if we keep seeing one type of person, body type, being praised.

Many say that the body positivity movement was not made for people who are overweight, that it’s made only for disabled people and individuals who can’t change their lives for the better. Women who do struggle with weight issues are seen as “lazy” and only wanting to join the movement as a “free pass”,  an “excuse” to continue being the way they are. But it’s not true, “The body positivity movement in its current form began to emerge around 2012, initially focusing on challenging unrealistic feminine beauty standards,” says Kendra Cherry, an author, educational consultant, and speaker focused on helping students learn about psychology. “As the movement grew in popularity the original focus on acceptance of weight began to shift towards a message that ‘all bodies are beautiful.’ ”

Even me, a teenage girl who shouldn’t be worrying every second of the day about how she looks, struggles with body and self-esteem issues. Having to deal with people pointing out my insecurities while I myself hadn’t even noticed yet did a lot of damage to me. And the media is no help either because unrealistic and toxic beauty standards are forced into my face every day just like it was forced into theirs, and these images caused us all to see flaws in our appearances.

This is where things should change. Beauty advertisements need to promote the message to get realistic. We need more representation for every body type in the media and not just one. Young girls shouldn’t be struggling to lose weight when their bodies are still developing. They should be able to see different people represented by the beauty industry and realize that their body is beautiful the way it is.