How We Can Campaign for Our Bodies 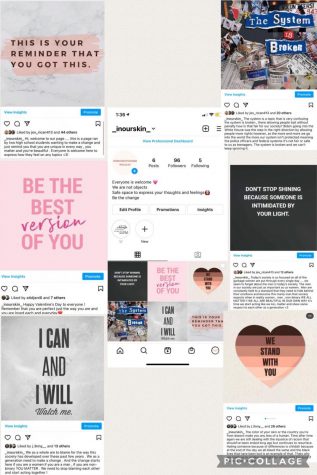 Sienna Mae is a 16-year-old girl who spreads body positivity across her social media platforms, mainly TikTok, and has over 14 million followers who look up to her as she promotes herself as a young woman with a positive message. Her Tiktoks consist of displaying empathy for her teenage audience who struggle with self-image because of the perfect women that society embeds into young minds. As a young girl, Sienna was bullied because of her body, and later was told how she was “too different” as she began to progress in the social media industry. She began using her platform for the greater good and has used her story to promote positivity.

Throughout our generation, women are sexualized for who they are, what they wear, or how they act. Many of these stereotypical topics are caused by our generation downplaying the fact that we as women should not need to live up to unrealistic ideals. We as women should use our voices to shed light on this issue. The misogynistic people in our society should not have a say in how we choose to live our everyday lives.

We are to blame, all of us. We can’t point fingers at just the men when we as a whole are equally to blame. The clothes on our backs and the decisions we choose to make should have no importance in someone else’s life, and we should feel free to express ourselves without judgmental comments being made. Those comments negatively affect the way we see ourselves, which leads to more self-destruction added to the destruction our peers have created. The result is eating disorders, self-isolation, and self-hatred.

Targeting men isn’t the solution …. Women are. As an answer to this issue, we came to the conclusion that perhaps talking to other girls about the topic will bring awareness to today’s generation. Conversation about this issue would help girls realize that this is something that shouldn’t be taken lightly nor be ignored.

During a Youtube video young middle school girls were asked a series of questions about today’s expectations on women and what attracts men to those specific women and pictures. And an 11-year-old girl states that “People who make Toddlers and Tiaras are kind of saying like this is how you are supposed to be, you should be this pretty.”She also mentions how people have connected being pretty to being sexy whereas you have to be sexy in order to be pretty.  Referring back to the show Toddlers and Tiaras, a show that broadcasts young girls from ages 1 month to 18 years old modeling with teeth caps, and big gowns feeding into the stereotypes of how young girls should be and act from the proper posture to the way they talk in everyday life.

In her freshman year of high school, Jashyra had participated in a school wide event used to honor our struggles and see how much of our peers are just like us.  During the event students were asked a series of questions about tragedies that had occurred in their lives which brought a lot of emotions to the table. The question was “Have you or a friend been sexually harassed” Jashyra had stepped forward and when the peer noticed she had stepped forward he asked her again to verify. He then proceeded to say that if she was to ever be sexually harassed he hoped to assist whoever was committing the sinful act.” It’s bound to happen to you. You’re small,” he said as he snickered. He added that because she was a girl it was bound to happen. Jashyra will never forget the atrocious words that had slipped out of his mouth carelessly that day.

Margaret Hersey, a teacher at Springfield Honors Academy said,” I think that it is really hard to be a teenager in the United States. When it comes to self-esteem it’s really hard to see the images that women see all the time from the moment that they can see things in the U.S if every picture that you see of a women looks thin and blond and blue-eyed and all those things then that’s what you start to believe that a woman is and that can do a lot of damage to young girls.” Even though there is some difficulty in how women are viewed in society, there is already a mental picture in a man’s head that there is such thing as a perfect woman. Men like to believe that women bring hurt and criticism upon themselves when they say “look what you’re wearing, you’re basically asking for it.” When in reality it’s them who do all of the unnecessary criticism.

Ahjae Mullen, a senior at the school, expressed how she felt that the main goal is to gain equality. She then goes on to say  “Women empowerment is about vouching for equality not superiority over men. And I think that’s when a grey area is created for women trying to advocate for themselves. I personally believe that society is to blame because women who firmly believe in gender roles believe that  they have a specific duty as a woman.”

Girls shouldn’t have to be afraid to speak on matters like this. As a solution we thought we could make an Instagram page and open the floor to women to give them a space to talk about their experiences with today’s society along with giving them a place to value their worth. If you are interested in joining our movement here is the link https://instagram.com/_inourskin_?igshid=o393pzkp1die. This will work to help us as teenagers and us as a community to come together and shine a light on ourselves and this issue. This social media platform will allow more people to come forward and tell their experiences without feeling judged by others as well as be a safe place to reach out if they need help with this issue. As teenagers, we are afraid to come forward because we value the opinion of others. We should be able to say how we feel without that heavy weight of “what if” lying on our shoulders. Along with managing a social media page, awareness of the topic could spread by contacting influencers such as tiktoker’s and even community leaders. Getting them to speak on this could help girls come out of their shells and encourage them to stand up and make a change as well.

People will try to say that girls should watch what they wear but in this case girls should have the ability to feel comfortable in anything in society and the opposite gender that preys on them when they can’t control themselves. Men think that we as women should value their opinions mainly on how we dress. Men use the same tired excuse of “You’re a lady act like it, your revealing too much” how about for a change we say “your a man not a boy act like it and treat a woman how you would treat your mother.” Although we don’t try to value their opinions, some part of us always has that in the back of our mind “I can’t wear this, he wont like it.”

We as women should come together to participate in a movement allowing others to express their feelings on this topic, ask for advice, etc. This page won’t be tailored to solely just women, if you are a man or non-binary you are more than welcome to participate in this. You have a voice as well, a voice that deserves to be heard. As a person you are free to dress how you please if that’s what you are comfortable in. You don’t need to change, you are beautiful as you are.

The Griffiner • Copyright 2022 • FLEX WordPress Theme by SNO • Log in